Back in October, Jürgen Klopp’s arrival at Liverpool Football Club was met with understandable optimism by the Anfield faithful. Six months on, a rousing comeback for Liverpool against much fancied Borussia Dortmund (BVB) in the Europa League quarter final has given the Merseyside club its best shot at winning this competition since doing so in 2001 as part of an impressive treble under Gerard Houllier.

In what will go down as one of Liverpool’s ‘legacy’ performances, the ancient, world-renowned power of the Kop finally manifested itself in a style which would have impressed even the late Bill Shankly.  Such is the uncompromising nature of Klopp’s tactics, the “Yellow Submarine” will likely arrive on Merseyside with at least one away goal already conceded, ensuring that the psychological advantage granted by the Kop’s voice is redoubled. 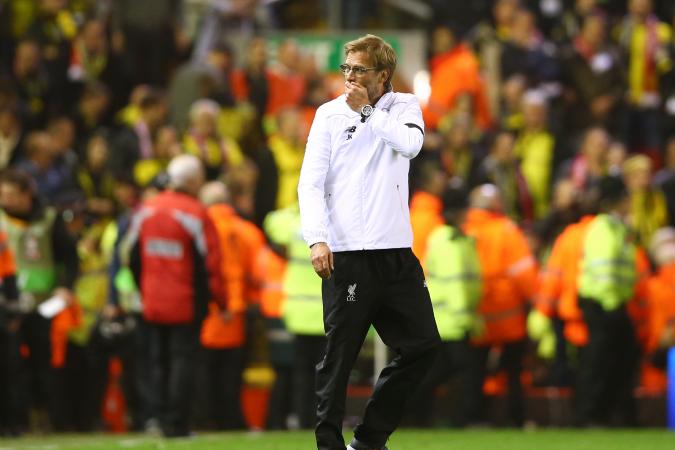 Since regaining top flight status at the first attempt in 2013, Villarreal have enjoyed three strong seasons in succession, and the club is now excellently poised to finish fourth, thus re-entering the Champions League. That noted, Villarreal have slumped in recent weeks, with a galling 2-1 defeat to relegation-threatened Rayo Vallecano representing the nadir of what has been a predominantly strong season.

With no competitive history between the two sides, the focus immediately turns to the individual battles across the park. Three in particular have the potential to change the course of Europa League history.

Shrewd wing play is the key to any successful counter attacking game, and both sides have the personnel necessary to cause damage in wide areas. Both of these players thrive on the overlap, often becoming makeshift support strikers at the slightest flick of the ball.

It will come as little surprise if Villarreal adopt the same plan that saw a 6-3 aggregate victory over Sparta Prague, and a 4-2 win in the away leg. However, right back Mario Gaspar will be personally keen to forget the fact that both of Sparta Prague’s consolation goals came from left sided midfielders.

Mario Gaspar was also largely culpable for the ease by which Real Madrid won a recent encounter with Villarreal, but he remains well placed to make an impact in this summer’s Euro tournament.

Once the subject of bilious ridicule from despairing reds, Alberto Moreno is a transformed player under Klopp; an excellent grafter that approaches this tie on the back of a pass completion rate of 97.8% in his most recent Europa League game.

Indeed, Liverpool remain unbeaten in this year’s competition, and should Liverpool be trailing at any time, Moreno’s improved workrate will be a huge asset.

Experience versus youth; seldom has the latter won the day in English football this season. On the Euorpean scene however, Villarreal have blended both to great effect, emerging unbeaten in what is now eleven consecutive Europa League games.

Assuming that neither side changes its formation from the previous round of Europa League games, Milner will be kept extremely well occupied by Villarreal’s left-sided attackers, with Castellejo in particular combining well with Cedric Bakambu. The duo shared three goals in Prague, but Castellejo’s pass success rate was none too impressive at just 79%.

With this taken into consideration, Milner undoubtedly has the vision and zonal anticipation to thoroughly disrespect the chemistry which exists between Bakambu and Castellejo.

Succinctly put, Milner’s experience enables him to remain composed and galvanise the squad, and the first leg should be a relatively straightforward continuation of his consistent recent form. As the game wears on, composure and consistency will speak volumes.

HOT TIP: If the price for a Liverpool draw (from behind at Half Time) sounds too steep, consider instead backing Liverpool to win the second half, regardless of the result. This is currently available at an average price of 119/50 (3.38)

Sturridge has made a scintillating return from long term injury, and is already England’s point man ahead of Euro 2016. Quite simply, Villarreal’s defence will require nerves of steel to cope with Liverpool’s most dangerous outlet.

In the quarter finals, Villarreal’s attacking prowess rendered defensive self-preservation utterly redundant, but there is real evidence that the men in yellow can hold out when the situation demands it.

Bundesliga high-flyers Bayer Leverkusen failed to breach the Villarreal defence in both ties of the Round of 16, while a strong Napoli side drew a blank at El Madrigal in the round prior to that. Victor Ruiz has also played every minute of Villarreal’s knockout fixtures, directly coinciding with the aforementioned unbeaten run of eleven Europa League matches.

HOT TIP: Expect a feisty battle between these two, but for those with red tinted glasses, Daniel Sturridge is priced at around 15/2 (8.50) with Betfair to score twice or more.

A close, somewhat fraught encounter is expected with little finesse from either side. Liverpool’s domestic form remains somewhat inconsistent, giving the tie’s underdogs Villarreal a degree of encouragement. Correct Score markets currently place the average price of a 1-1 draw at 128/25 (6.12).

All prices stated are subject to significant fluctuation.